Our Poker Hand of the Week is one of the most gutsy bluffs since a long time! The hand was played in the massive £2,000/£4,000 Triton Poker London Cash Game with a minimum buy-in of £400,000 and several Triton Poker regulars such as Tom Dwan, Eltson Tsang, Paul Phua and Tan Xuan. 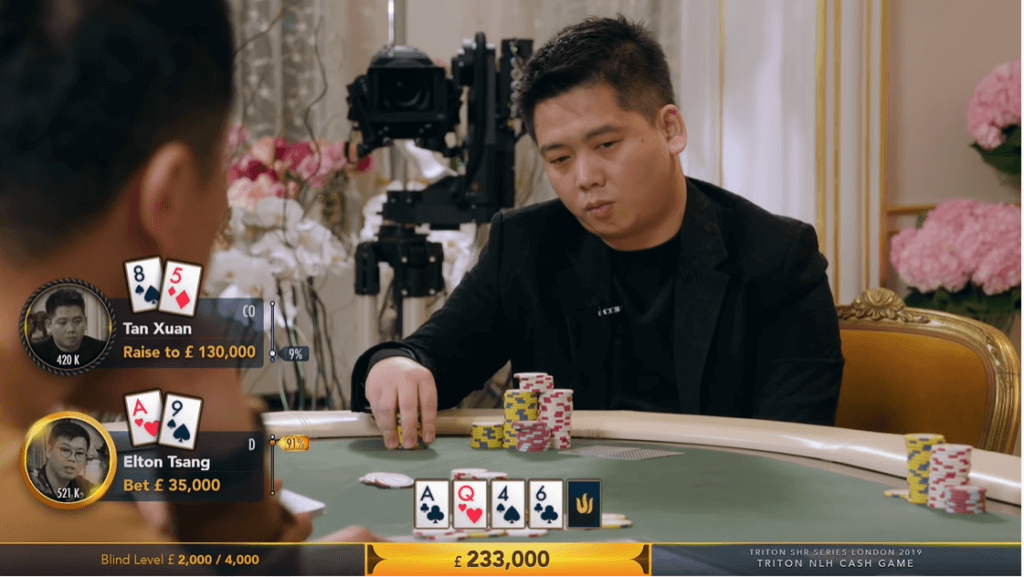 The latter has the reputation of being the best Short Deck player in the world and is also a beast in No-Limit Hold’em.  In this exceptional hand, he clashes with Chinese high stakes crusher Elton Tsang. They have heaps of history, action is guaranteed so fasten your seatbelts!

The flop comes A♣Q♥4♠ rainbow, which means Tan Xuan wiffs completely, but since he was the initial raiser and this board texture clearly favours the aggressor, he makes a contibet of £12,000.

Elton Tsang, who has somewhat underreped his hand preflop, continues to do so and again just calls as does Yu Liang with his gutshot to the nuts. Pot size: £68,000

The turn 6♣ turns Tan Xuan’s complete air into a little bit of equity with a gutshot, but after getting called twice on the flop and turn he has to be worried that one of his opponents has an Ace and so he checks.

Elton Tsang looks both confused and disgusted and after almost a minute in the tank, he mucks his hand!

Super interesting hand that demonstrates, how important are metagame and having reads on your opponents in live poker and high stakes cash games.

Let’s go through the hand step by step. The preflop raise might seem very lose to many, but since we are playing 6-max and Xuan is in the cutoff with the two tightest players in the blinds, it actually makes a lot of sense to steal a lot and widen your range.

Elton decides to only call with A♥9♠, which is ok since he is in position, but has the disadvantage that he doesn’t really knows where he stands. Would he have made a small 3-bet, it would have folded out all lose cutoff opens and in case of a call gave him a lot of infirmation about the strength of Tan’s hand. Now he is playing a guessing game…

Elton’s guessing continues on the flop, when Xuan makes a continuation bet on the Ace-high flop, even though he has hit top pair.

On the turn is, where things are getting spicy! Tan Xuan checks and Elton Tsang now understandably thinks that his hand is good. Consequently, he bets half pot.

When the action comes back to Tan Xuan, he has a flash of genius and makes a pretty large check-raise. This move represents extreme strength and he is basically saying he has Two Pair (A-Q) or a set. A-K is also possible, but rather unlikely given how the hand was played.

The bottom line is all hands Tan Xuan is representing here have Elton Tsang in very bad shape, that’s also the reason, why he folds.

However, would Elton have made a 3-bet pre, Xuan would probably have folded and more importantly would he have checked behind on the turn, then he would have not brought himself in dire straits and probably won the hand.