It was an insane weekend at the WSOP Super Circuit Online Series with an insane $17,343,144 in prize pools spread over four events. All tournaments attracted huge fields and smashed the Guarantee. The highlight event $10,000,000 GTD WSOPC High Roller Championship was won by Costa Rican player “800-522-4700″, who beat online legend Patrick Leonard Heads-Up.

It was an insane weekend for online poker and the GG Network was bursting with action as four winners were crowned in the inaugural WSOP Super Circuit Online Series.

The tournament was a big success attracting a massive field of 505 entries to surpass the guarantee by almost 25 percent.

Lots of big names in the field

The top 72 places were paid and many big names such as Kristen “Krissby24” Bicknell, Fedor Holz and Bertrand “ElkY” Grospellier and Danny Tang all busted shy of the money.

It took almost 15 hours to crown a champion and eight different nationalities were represented at the final table. Players from Canada took home nearly $2 million in cashes as “BlackPhilllip” finished in 4th for $865,749.60, while Natural8 player “HotPot44” came in third for $1,181,109.78.

Online poker legend Patrick Leonard, who plays on GG Network under his moniker “Babu$hka”, made it all the way to the heads-up stage and ultimately had to settle for second place. 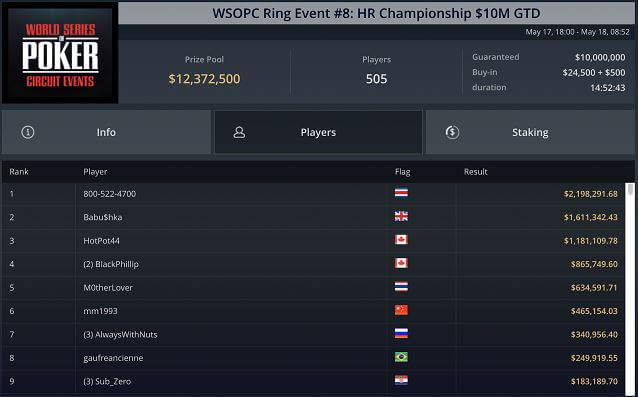 Guarantee more than doubled in the PLO High Roller

“ChilaxChuck” from Canada made a very impressive performance by knocking out all but one opponent on the final table his road to victory.

The last hand of the  heads-up was a classic Omaha situation. “BailaMorena” was All-in on a 3♦ 7♠ 5♦ flop having hit the straight and gut called by “ChilaxChuck” with the nut flush draw, which materialised on the 7♦ river. 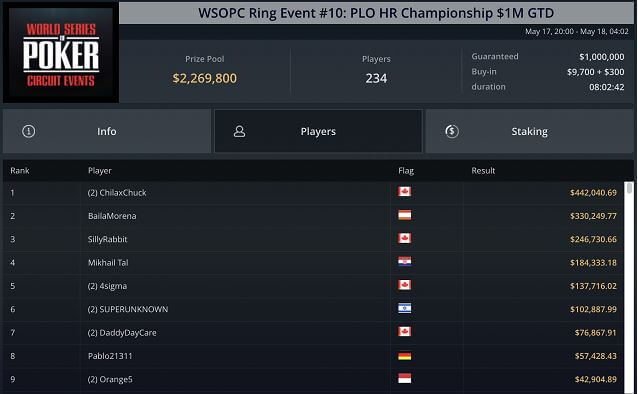 The WSOPC Mini Main Event was eagerly-awaited by many as it gave the unique chance to play with a small buy-in of only $100 for a massive $1,000,000.

What then happened exceeded all expectations as drew a staggering 29,537 entries almost tripled the prize pool to $2,700,844. 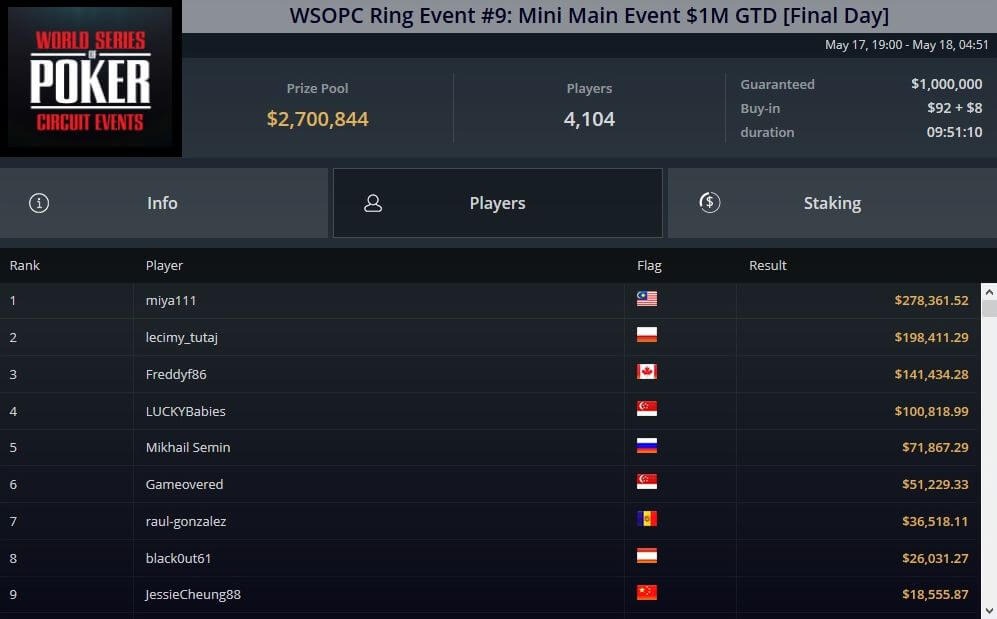 The fourth and final event of the Super Sunday was the $200 Monster Stack, which nearly doubled the guarantee and created a prize pool of $949,624.

A huge field of 5,161 entries emerged and it took close to 15 hours to crown the winner “ShopChop96” from Mexico.

Preview to the next WSOPC Highlight Events

The next WSOP Circuit Ring is already up for grabs tonight at 6 pm UTC in Event #11 Deepstack Bounty Hunters.

WSOP Ring Event #11 is less than 5 hours away.
Talking about guarantees, we’ve been smashing them lately.😉
What’s gonna be the final number of entries today? Comment with your nickname – the person closest to the final number wins a ticket for next weekend’s Ring Event! pic.twitter.com/rxvyeKL0rL

With a reasonable $210 buy-in and a large $500,000 Guarantee, this event is sure to draw a crowd of knockout enthusiasts.

Get up to 50% Rakeback at GG Network!

Sign up through us now at our GG Network partner sites and get up to $2,000 First Deposit Bonus and up to 50% Rakeback plus access to high-value private poker promotions such as our Exclusive weekly Natural8, BetKings or Bestpoker poker freeroll.

Get $5 Free and join our exclusive $250 HighStakes Poker Freerolls!