How to use poker tracking software to make more money

What is Tracking Software?

Tracking Software in online poker began with databases. These allowed players to store downloaded hand histories to track their play and save key hands for review.

These stats would appear on the table in real time using what is called a “Heads-Up Display” (HUD). Suddenly, grinders had unbiased stats they could use to analyze their opponents on the fly.

In short: a winning player’s profits come from maximally exploiting weaker players. HUDs helped grinders to do this on many more tables at once.

The primary disadvantage of tracking software is use of system resources. Players often run browsers, odds calculators, music players and Skype while grinding. Some older PCs may struggle with a larger workload.

Finally, some people think tracking software can be a distraction. Critics argue that by relying on tracking software, grinders never learn to make and note down their own reads. Others say that players put too much faith in statistics.

Our view: This is only a problem if you make it one. It is important to always consider your sample size, the value of each statistic and the unique circumstances of each hand.

My personal recommendation for tracking software is Hold’em Manager 2 (HM2). HM2 has a massive array of functions including, but not limited to: 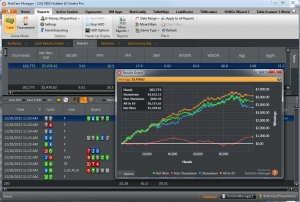 You can view winnings, rake, time played and many more gameplay stats. You can also generate a winnings graph. 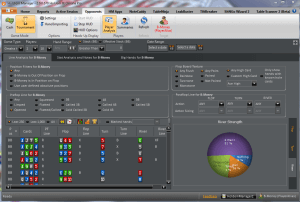 A player analysis tab for studying player tendencies in detail. 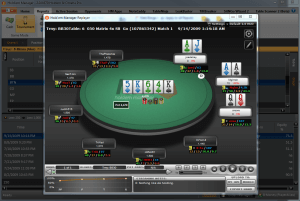 A replayer for hand review. Note that HUD-style stats are featured in the replayer as well.

The major competitor to Hold’em Manager 2 is Pokertracker 4. Many players prefer PT4 to HM2. PT4 offers essentially the same functionality, though I have heard it may run a bit smoother on older PCs.

I chose HM2 when I started and have become comfortable with it. HM2 has everything I need and my PC is more than powerful enough to run HM2 smoothly.

You are wasting money, if you haven’t invested into a HUD and learned how to use it.

You can’t go wrong with either HM2 or PT4. If you are a poker grinder on a network that allows tracking software, you need to be using one of the two.

HM2 and PT4 come with 30 and 60-day free trials so that you can find the one that best matches your needs.