In our Poker Hand of the Week Daniel Negreanu returns to High Stakes Poker Season 9 with a bang and a very interesting overbet bluff vs. Influencer Kim “LetsGiveItASpin” Hultman. 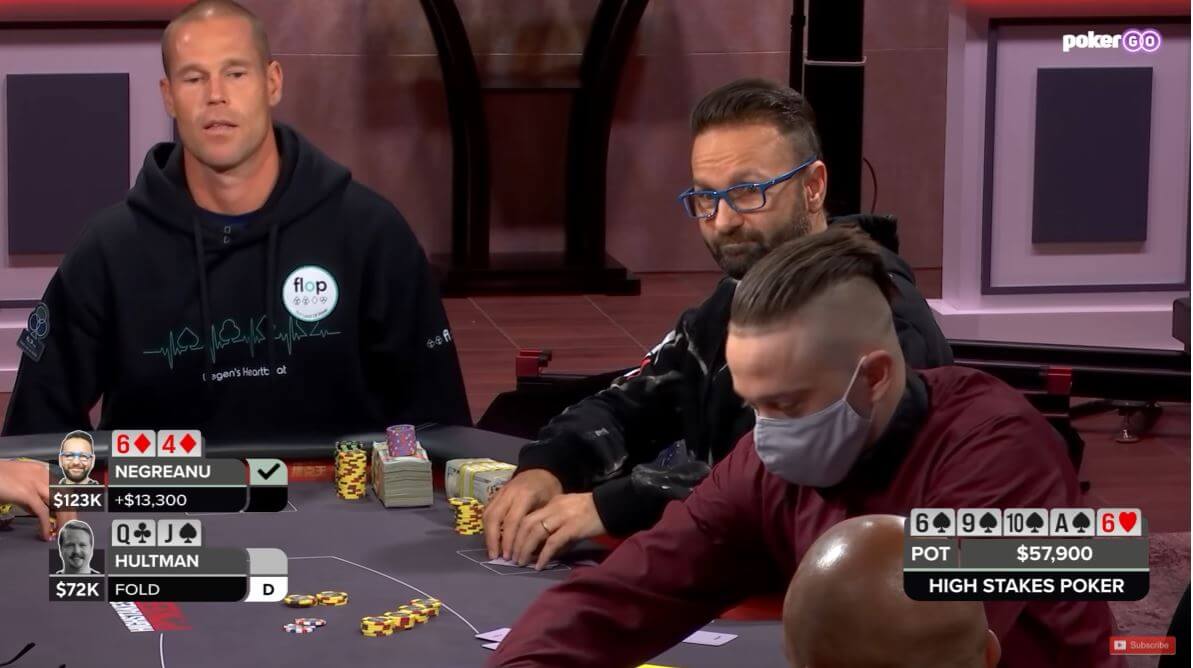 The game just started and Hultman is the big unknown on a table full of poker superstars. They are playing $200/$400 No-Limit Hold’em and DNegs got Hultman covered.

Daniel Negreanu open-raises from MP to $1,600 with 6♦4♦, “LetsGiveItASpin” calls on the button with Q♣J♠ and the Godfather of Poker Doyle Brunson also comes along from the big blind with 9♥8♠. Pot Size: $6,400

“LetsGiveItASpin” has hit the flop by far the hardest with his open-ended straight draw and flush draw and is a huge 58% favourite to win the hand, and he also calls. Pot Size: $10,900

The A♠ on the turn is a very interesting card as it hits the UTG preflop raising range of Negreanu very hard. DNegs knows this and continues his story with a reasonable 50% pot second barrel.

However, Hultman has made the third Nuts and can’t fold, but Doyle Brunson gets out of the way. Pot Size: $21,600

Heads-Up to a the 6♥ river, which is another spicy cards as it pairs the board and most set and two pair combinations now filled up. In fact, Daniel does have worthless Trip though and need to bet in order to be able to win the hand.

And betting is what he does with a massive almost 2x pot overbet. “LetsGiveItASpin” folds surprisingly quickly and DNegs wins a $57,900 pot with a sick overbet bluff.

Let’s go through this very interesting hand step by step. Preflop DNegs makes a very loose raise from UTG with 64s and “LetsGiveItASpin” has an easy call from the button with QJo.

Although Negreanu has the best hand on the flop with bottom pair, he is only 32% to win, since Hultman has a very strong combo draw. “LetsGiveItASpin” has two options here: Call or Raise.

He decides to take the passive route, but in general a raise is often the better option with a strong draw as you can win the hand straight away and even if you get called, then you still have plenty of equity.

The Ace of Spades on the turn hits Daniel’s range hard so he correctly fires a second barrel, but “LetsGiveItASpin” has made the third Nuts and he obviously can’t fold.

This changes on the river though as now not only the Ks and Qs have him beat, but also all flopped sets and some Two Pair combinations have turned into a full house.

Suddenly, there are quite a few hands that beat “LetsGiveItASpin” at first glance. However, if you think it through thoroughly, then Negreanu is polarized to the King of Spades as he is betting the turn, which he wouldn’t do with a set or Two Pair.

That being said. Hultman should at least have taken more time for his decision and then he would have realized that Daniel Negreanu is very polarized to the Nuts or nothing in this spot.

“LetsGiveItASpin” is by far the weakest player, not to say the fish at the table and this hand is a very nice example how important it is to pick up on weakness and to exploit it in live cash games.

Daniel Negreanu has tons of experience and is good in picking up tells and reading body language. “LetsGiveItASpin” gives away way too much and it is pretty obvious for everyone to see that he doesn’t feel comfortable with his hand.

DNegs takes great advantage of it and this is the reason why this sick overbet bluff worked. However, I highly doubt that DNegs would have made the same play against good hand readers such as Patrik Antonius or Tom Dwan.

Watch the Poker Hand of the Week here: