Why Twitch is good for the future of Poker?

Everything that brings new players to the game we all love is good for and Twitch certainly does.

It builds bridges between poker and trending eSports games such as Hearthstone, StarCraft II or League of Legends.

Nowadays, eSports legends such as Team Liquid are streaming online poker on their Twitch channels, introducing the game to thousands of new potential players.

Back to the roots, as Poker and esports have always shared a close relationship, with many video game competitors have transitioned from the world of the consoles to the poker table such as Bertrand “ElkY” Grospellier or Lex Veldhuis.

Twitch is educational and offers poker coaching for free

While poker live streams have been around for quite some time, most of them had the aim to entertain instead of educate.

This is a whole different story on Twitch as you can see some of the top online players such as Parker “Tonkaaaap” Talbot, Jason Somerville, Jaime Staples, Nanonoko or Brian Paris see play live every day.

The combination of seeing how they play their hands and hearing their thought process on it has huge educational value, which goes into the direction of free poker coachings.

And the best thing is, Twitch Poker is interactive, so you can ask questions and get them answered.

Many see Twitch as the future of Poker media and for a good reason. Speaking of interactive this also applies to live streams from big live tournaments. 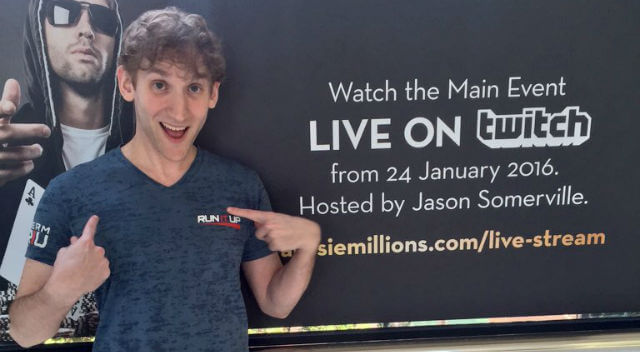 Jason Somerville managed to stream the last two episodes of the Aussie Millions as well as the PCA live on his Twitch channel and even the most expensive tournament of the world, the $300,000 Super High Roller Bowl was streamed live there.

All broadcasts were a huge success and people were really engaged and interacting a lot with each other.

It will be only a matter of time until we will see the tournament of tournaments, the WSOP Main Event being streamed live on Twitch

Our fantastic Twitch Promo is continuing in April!

Speaking of hitting that follow button, we are still running an amazing promo on our Twitch channel, where you can get up to $15 in Token for free.

All you have to do to is to click the follow button at the VIP-Grinders Twitch channel and fulfill the tasks listed below.

And you can get up to $15 Token for FREE for any of the following poker rooms: Coral Poker, Partypoker, RedKings, and Planetwin365.

How does it work?

Poker live streams and poker videos on Twitch Poker or YouTube have been skyrocketing in popularity in recent years.

Nowadays, you can pretty much follow all major poker tournaments live on your mobile phone or computer.

Therefore you can follow your favorite pro players, regular grinders who are casually playing online or follow live poker events.