High stakes legend Phil Galfond has given some insight into his amazing comeback victory over VeniVidi. The turnaround produced one of the most spectacular poker matches we have ever seen.

After being down an eye-watering €900,240 Galfond took a break and came back to steal a popular victory. 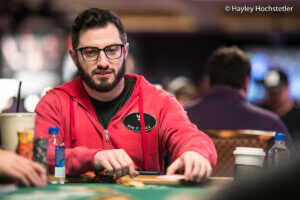 Galfond Not a Washed Up Old Pro

The first match of the Galfond Challenge exceeded all expectations in every department.

We had Phil Galfond offering a challenge to anybody in the world to play a heads-up PLO match against him. The problem was that he hasn’t really been seen online for quite a few years, and the best players are now even better.

The general consensus was that Galfond would not be able to stand up to the very best online crushers today. And after only a couple of weeks into the match it was heading that way. €900,240 down and the haters were out in force.

Galfond came up with this challenge idea to prove to the world that he was still the man in PLO games.

“My original aim was to prove that I could still play, mainly in order to let Run It Once Training members know that they were learning PLO from the right guy,”

Even for such a great player there were surely moments of self-doubt at this stage. His reputation as the premier producer of PLO poker videos was on the line. 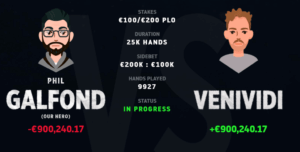 Having only played a few hundred hands against VeniVidi before the challenge Galfond had his work cut out to catch up.

“After the first few days of the challenge, I spent a lot of my off time studying his game. I did a lot of stat breakdowns, as I often do against heads-up opponents, but to be honest, that didn’t help me too much,”

Being one of the original old school players from the poker boom era it’s no surprise that the Run It Once founder went a more intuitive route for success.

Using the basic replayer software he went through all of the hands that saw a showdown. Not a single note was taken, nor was any analysis done.

“… I just processed the information and let my brain digest it. By the end of the challenge, I really felt that I had a good handle on the way he thought about a number of different situations and the way he’d play a lot of hands,” 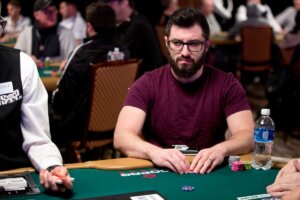 Phil Galfond Back From the Brink

The real turning point of the match came after Galfond saw his game was deteriorating. In only a couple of sessions he felt the change in mindset.

“Towards the end of the downswing, I realized that my game was starting to fall apart, and that’s when I decided to take a break.”

“I guess that break was a turning point in that I was able to mentally reset and recover, but I really don’t feel my game suffered much before then until the last couple of sessions.”

The mentally resetting was successful, although the goal on restarting the match was only to win the second half.

Maybe this psychological  relaxation was the key that took the match into the very final day leaving Galfond as the victor by a tiny €1,671.58 margin.

Galfond paid tribute to VeniVidi as a more than worthy opponent who made more improvements to his game than he did over the course of the match.

He also showed the world that he is the right guy to be teaching you how to smash real money poker.

Join Run It Once Poker and Get up to €600 First Deposit Bonus Plus Up To 75% Rakeback!