The Postlegate cheating scandal unexpectedly sprang into life this week. Alleged cheat Mike Postle filed a motion to dismiss the $10million civil lawsuit against him. In doing so, however, he inadvertently revealed his close connections to the RounderLife magazine that has been consistently trying to muddy the waters…

It is peculiar @RounderLife has obtained Postle's motion, filed "late this afternoon." Counsel were e-mailed copies earlier today; it has not been docketed, hence no clerical stamp appearing thereupon. I'll forbear from commenting on the motion itself. https://t.co/yJXd06ydcG

You can catch up by reading the articles below, containing all the necessary background information:

Postle finally filed a motion to dismiss the case similar to that filed by the two other defendants in the lawsuit, Stones Gambling Hall owners Kings Casino (not connected to the famous Leon Tsoukernik-owned Rozvadovpokerroom of the same name), and the cardroom’s poker manager, Justin Kuraitis.

Between the three parties, they are being sued for $30million by dozens of poker players. Poker and gambling lawyer Mac VerStandig is representing them. 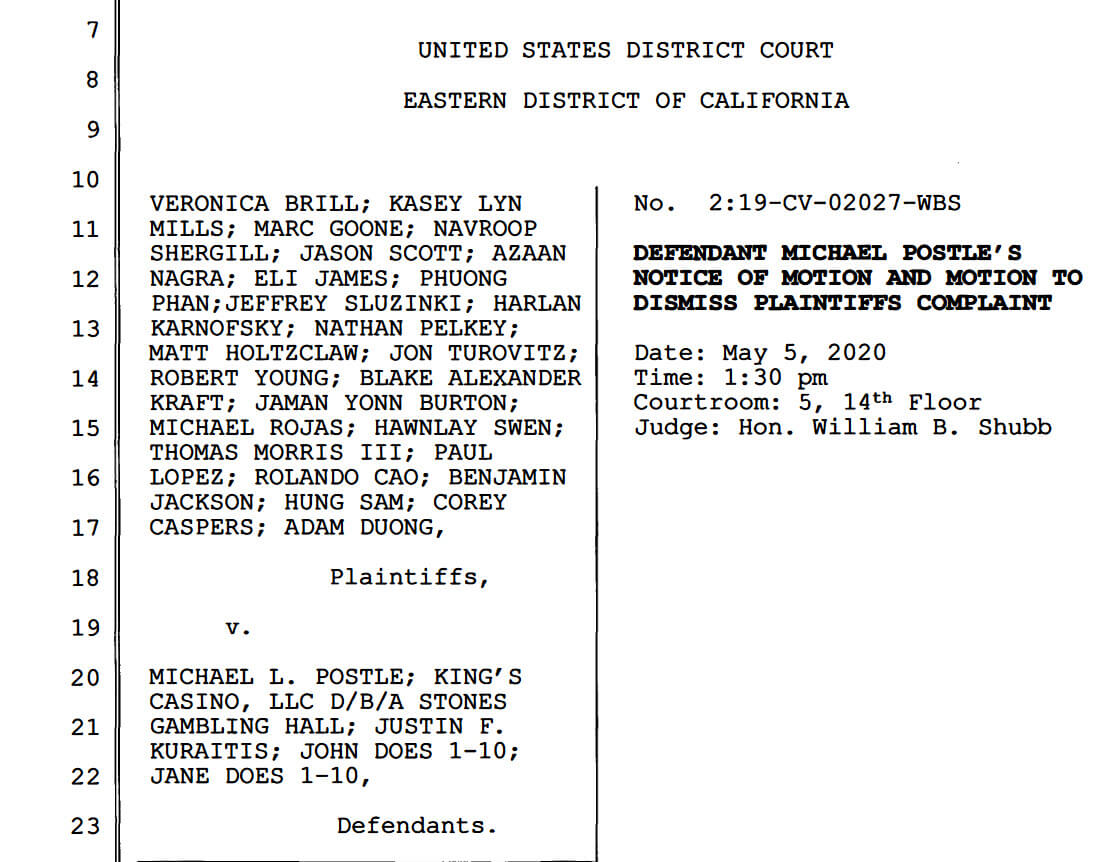 Postle’s filing of March 24th states the grounds for claiming dismissal as: ‘Failure to state a claim upon which relief may be granted, and failure to allege claims of fraud and misrepresentation with the required particularity’.

That’s legalese and standard in such cases. The detailed reasons are offered later in the court filing. Postle claiming among other things that those bringing the action:

Naturally, at an early stage of such a case, the details have not been fleshed out in court papers as to how Postle is believed to have carried out the claimed cheating. Should the case progress, the finer points would likely see the light of day.

In any event, Postle’s actual filing for dismissal was, in fact, the least interesting part of this week’s Postlegate news…

Those who have been following Postlegate will know that RounderLife magazine has been consistently and regularly defending Postle, both on Twitter and through their own magazine website.

They have also claimed that any relationship they had with Mike Postle was short, unpaid and long-long-ago.

Imagine then the surprise when a version of Postle’s legal filing this week included not an official personal email address, but this one – roundermagpro@gmail.com.

Haley Hintze spotted this damning public faux pas. She received an apparently earlier and unedited version of the court document.

It appears to show very clearly that RounderLife and Postle are indeed very closely related, some even suggesting that Postle himself is behind the propaganda output from the magazine.

Is Postle defending himself or…?

Hintze’s scoop also shows that Postle’s filing indicates he may not be fully representing himself in the lawsuit as claimed.

The different versions of the documents as shown in her KickAssPoker article show Postle replaced by a Sacramento attorney named Owen Hughes.

A lawyer by the same name, as Hintze has pointed out, is currently being represented in another case by William Portanova, the lawyer who initially defended Postle publicly and later claimed not to be.

Curiouser and curiouser, large swathes of the Postle legal filing are copied almost verbatim from the Hughes-case. People accused her of violating the False Claims Act.

The whistleblower in the scandal, Veronica ‘Angry_Polak’ Brill, continues to be subjected to a level of abuse and hatred by apparent trolls on certain poker forums.

On 2plus2 she had to defend herself yet again from personal attacks. Although the RounderLife connection above at least provided some new ammunition. 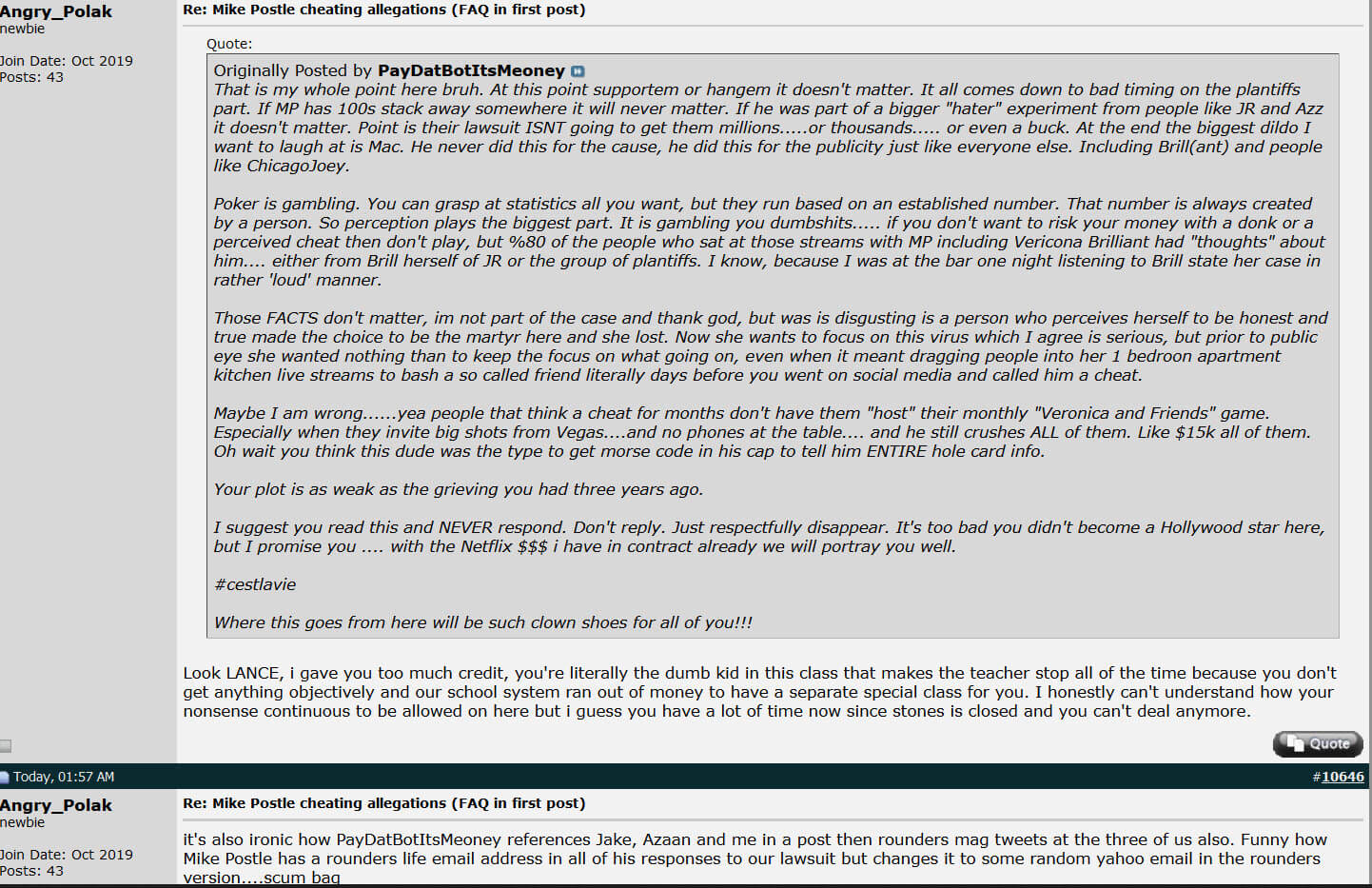 RounderLife was also at it on Twitter. The magazine was quick to throw mud through consistently refusing to answer legitimate questions brought up about Postle’sbizarre table-behavior amid his incredible winning streak.

Receiving a copy of the motion after it was filed isn't nearly as peculiar as @mac_verstandig announcing @Angry_Polak would be attending an upcoming @VerStandigLaw dinner – The day before she goes public with her allegations. https://t.co/m4btSRZmuF

…though it seems to be wearing thin with some poker fans…

On your site it clearly states that you have no opinion on the Postle situation and are just putting the information out there.

Why is every article you have written under the assumption he didnt cheat then? Not a single one that could potentially be viewed negatively. Hmmm.