There is huge cash up for grabs in the BetKings Team Battle, since the winning team will get $3,000 on top of the tournament payouts.

How can I join the BetKings Team Battle?

The BetKings Team Battle is the first online poker tournament, where team play is not only allowed, but it is actually highly recommended.

Please Note: In order to join the Team Battle, you need to have a Discord account and to join the BetKings Discord server

How does the BetKings Team Battle work?

First of all, there is a registration period from September 19 -25, where you will have to opt-in for the team battle.

This phase is managed through GiveLab: All you have to do, is to FILL IN THIS FORM, where you enter your BetKings nickname, email address and your username

ATTENTION: Failure to provide any of those 3 elements will result in your exclusion from the tournament. ALL GIVELAB FIELDS ARE MANDATORY.

Upon making your first deposit on BetKings, you can receive either a 200% up to $1000 first deposit bonus clearing at 20% OR $100 in instant bonuses. You will also get up to 60% rakeback via the Fish Buffet, our Exclusive $30,000 Race, our Exclusive $25,000 GG Race and various other BetKings promotions.

Opt-in between September 19th and 25th

Please Note: You have to opt-in for the BetKings Team Battle between 19th and 25th of September.

Once you have opted-in, you automatically and randomly be assigned to one of the four teams: blue, red, yellow, green. In case there will be more than four tournaments, BetKings will add purple, orange, etc.

You will be assigned the Discord Role of the same color of your team and will have access to a private team channel. A team can consist of maximum 20 players.

There will be a total of four poker tournaments at the BetKings Team Battle. Each team can have a maximum of five players per tournament. 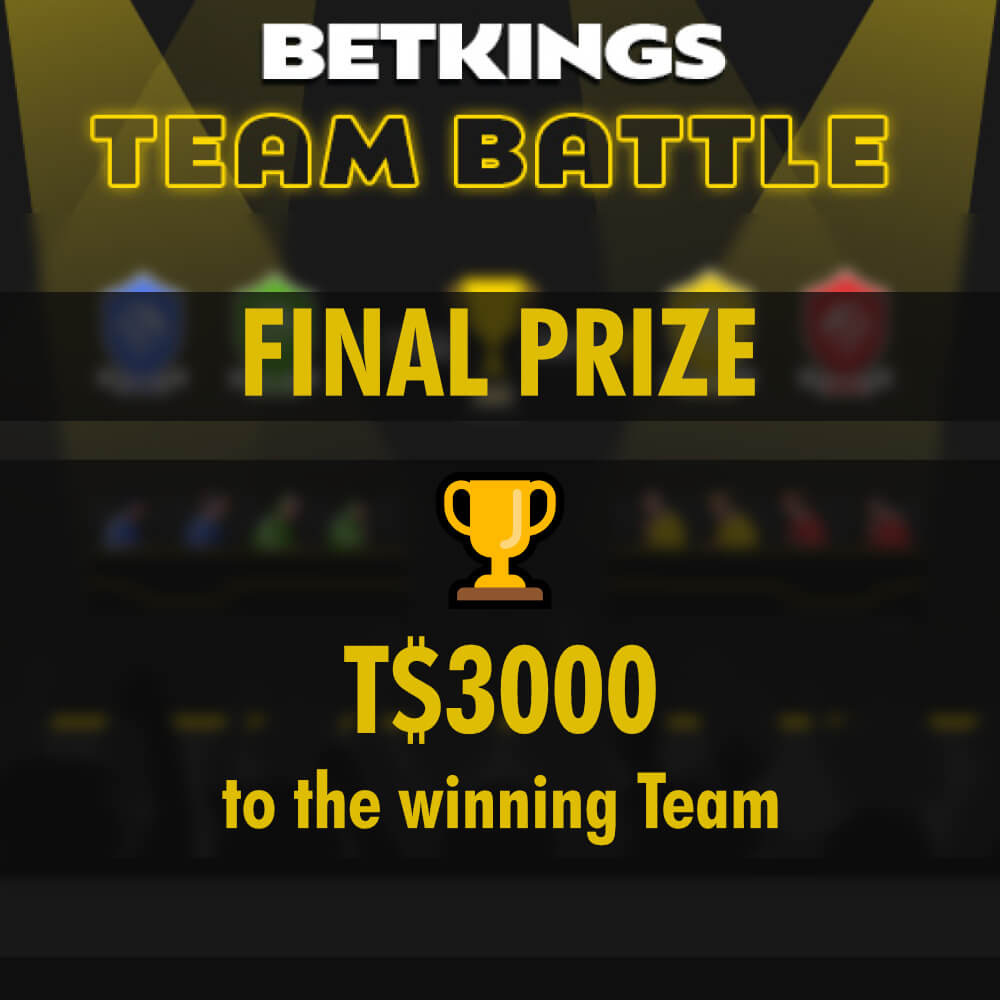 The players will be randomly assigned to the tournaments to make sure that all teams have the same number of participants.

The five players have will have the chance to communicate via the private Team Battle Channel to maximize their chance of winning by giving each other advice and talking poker strategy.

Every tournament awards cash prizes and more importantly points for the leaderboard, where a whopping $3,000 is up for grabs.

The prize money will be split collectively among the members of the winning team.

All tournaments take place on the 1st of October

When will the cash prizes be credited?

Once the winning team of the BetKings Team Battle has been announced, they will split the top prize equally among team members and credit it within 4 to 5 working days.