Watch the best hands of each High Stakes Poker Season 8 episode on VIP-Grinders.com

The long wait is finally over as the new High Stakes Poker Season 8 kicked off last night after a nine year break. From now on there will be new episode coming out every Wednesday. However, the episodes are exclusive to those with a paid PokerGo subscription and we want to give our players the chance to see the best hands and biggest pots for free. That’s why we will sum up the top hands of each High Stakes Poker Season 8 episode on the next day on VIP-Grinders.com!

The latest High Stakes Poker episode was dominated by an epic battle between JRB and Rick Salomon, who clashed in several massive pots. Watch the best hands of episode 7 below!

There were no changes regarding the lineup and we continue with the same players as in episode 6, who are as follows:

JRB and Rick Salomon battled it out big time in High Stakes Poker Season 8 Episode 7 as they clashed in several huge pots.

Bellande only has 4 outs going to the river, but the 9♣ does indeed shows up making him the nuts. Rick checks as the full house and flush draw both came in. JRB goes for a huge overbet by betting $135,000 into $90,800 trying to make it look like a bluff.

Rick goes into the tank and mumbles “Flopped a straight” before calling just to see the bad news, while this massive $360,800 pot brings JRB a bit out of the huge hole he has been in so far. 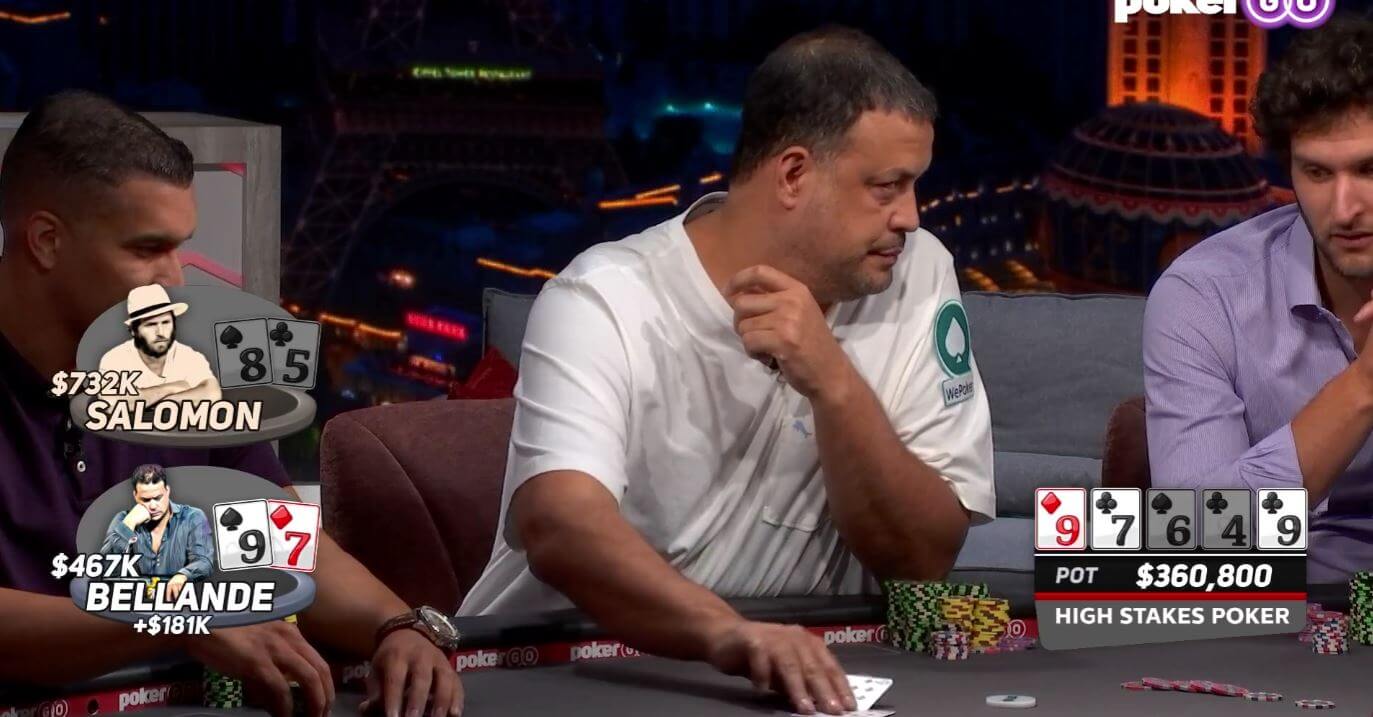 To kick things off in style a very big pot develops in the very first hand of episode 7 between Michael Schwimer and JRB.

Michael Schwimer finds Q♥Q♠ on the button and bumps it up to $7,000. Tom Dwan defends his straddle with A♥4♥ and LeForbes and JRB call as well. Just like that there is already $29,000 in the pot preflop.

4-handed to the very interesting flop of 2♠7♥9♠. Big flop for JRB as he picks up middle pair plus a flush draw, while Michael has an overpair. Damien and Jean-Robert check to the preflop aggressor, who goes for a large $24,000 continuation bet. Dwan and LeForbes fold, but JRB check-raises Schwimer All-in! Michael calls and they agree to run it twice:

Michael is a slight 54% favourite before the two boards are dealt and here are the two runouts:

As you can see Michael wins the first one. On the second board Bellande makes the flush on the turn, but Schwimer makes a higher flush on the river. That one hurts and once again pretty unlucky for JRB, who is off to a bad start as the dealer pushes a huge $299,800 pot to Michael Schwimer.

So far we hadn’t seen much from US pro John Andress as he played very tight and patiently waited to his spot. Patience pays off in poker as it came towards the end of episode 7.

John hits gin on the J♥ turn as it makes him top set. Not the best, but also not the worst card for Schwimer as there is now an overcard on the board, but he also picks up a gutshot. Andress elects to go for a rather small sizing of 40% pot and Schwimer sticks around. Pot Size: $156,000

The 10♦ is the money card for Andress as Michael now has trips, while he has full house. Schwimer puts him all-in for $58,100 and gets snap-called. 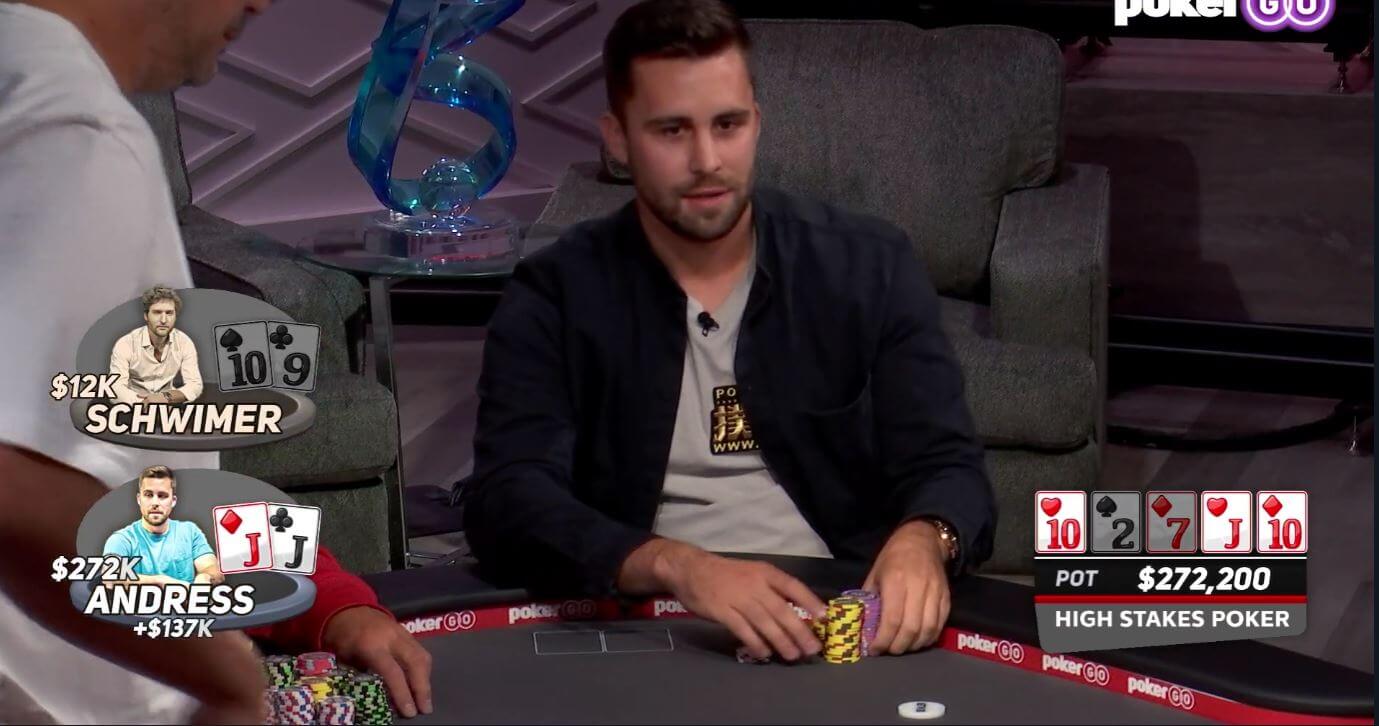 In the last hand JRB and Rick Salomon, who had an epic battle throughout the entire episode, clashed again.

5♣J♠J♥ rainbow gives JRB a monster, while it’s also decent for Salomon, who flops two pair with top kicker. Bellande leads for $8,000 and only Rick comes along. Pot Size: $28,800

2♥ on the river is a blank and Bellande makes a value bet of $31,000, which is a little bit less than half pot.  Rick thinks for about 20 seconds and then throws in one chip signalling a call.

JRB, who was the biggest loser in the first seven episodes, wins another large $126,800 pot and is on his way back to even. 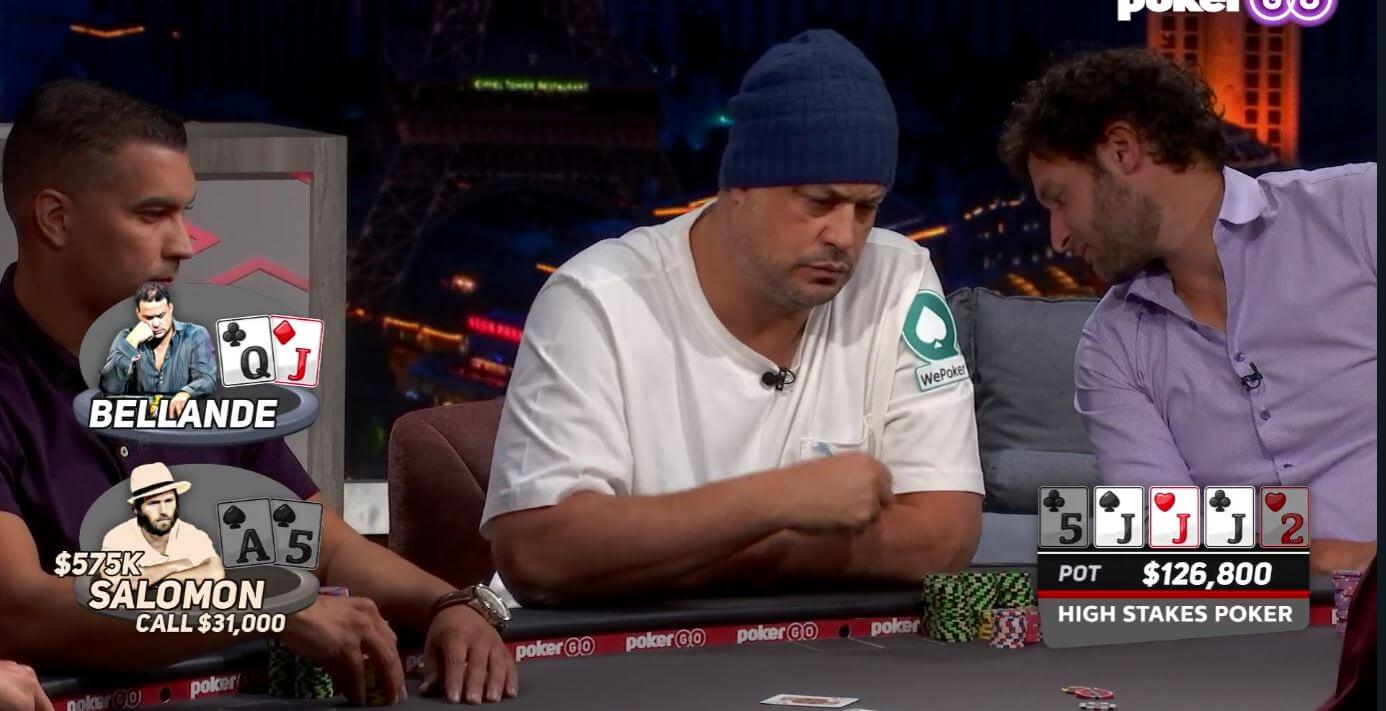