A November to Remember at Americas Cardroom’s with $12,000,000 Million GTD OSS and $6 Million Venom

The $12,000,000 GTD Online Super Series will kick off on November 20th followed one week later by the $6,000,000 GTD Million Venom, which will be the biggest prized online poker tournament ever held on the Winning Poker Network. The winner of this epic tournament will be taking home at least $1 million!

Americas Cardroom (ACR) has already had a great year, thanks to its aggressive push to continue raising the bar on poker. The popular US-facing poker site isn’t ready to call it quits yet, either.

ACR is gearing up for the Online Super Series XV (OSS). The tournament series takes place from November 20th through December 15th, and includes 26 days of poker action.

The OSS is for everyone, from beginners to the pros. It includes an excellent range of events, including NLH, PLO, and PLO8 tournaments. Moreover, there are regular, turbo, and hyper-turbo structures that will be a hit with everyone.

There is typically just one $1-million guaranteed event at OSS tournaments, but this won’t be the case in the upcoming series. Get ready for two of the significant events! The first of which will launch on Sunday, December 8th at 3 pm ET with a buy-in of $540.

The second gets going on November 20th with a $215 buy-in and 13 Day 1 options. Those players who advance will return and compete for cash starting Sunday, December 15th at 3 pm ET. 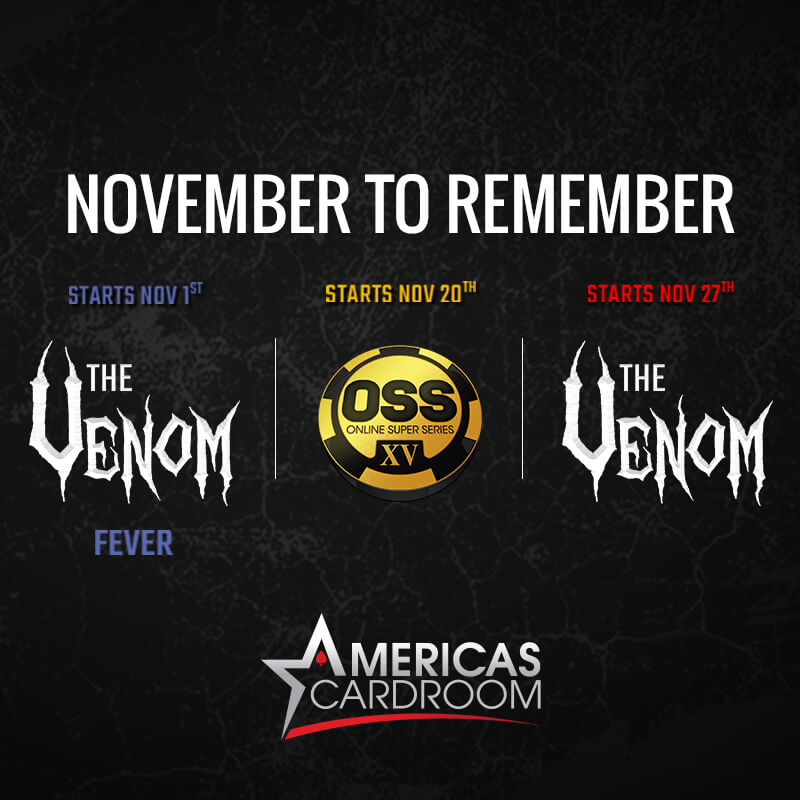 The Featured Event of the OSS is the $6 Million Venom and it gets underway on Wednesday, November 27th. It has a $2,650 buy-in and might not be within reach for some players. However, it isn’t the only way to get in on the excitement.

If you’re not familiar with Cyclones, they’re a unique type of step tournament with a blitz satellite twist. Americas Cardroom introduced them on November 14th, and the excitement begins with players first choosing any step of the seven available. The lowest step only costs $0.25.